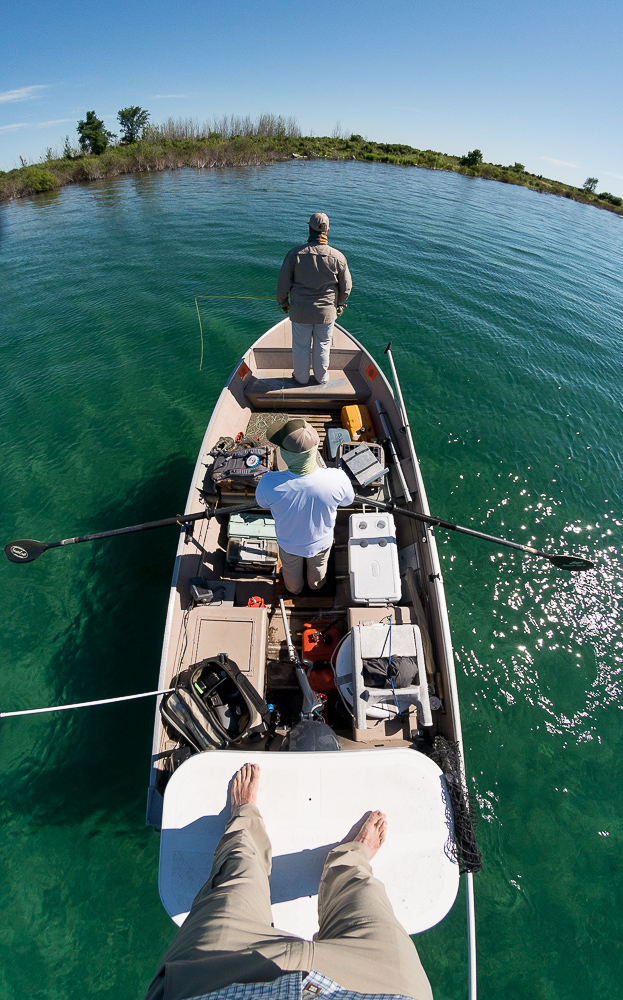 Kevin raises the outboard then lifts the oars and slides the blades into the water. I stand and straighten my shirt, turning to look at him. “Periscope up?” he asks, and I nod and slide under his right arm and pick my way into the back of the boat and onto the polling platform.

I like being up here. I like the advantageous perspective, how the glare runs just a little farther away toward the horizon like a pretty girl hiking up her skirt, just a little higher, just for me.

It reminds me of a scene in a movie called The Mothman Prophecies. Richard Gere is a reporter who is drawn to a small town in West Virginia to investigate some supernatural-ness. He learns of these strange beings known to some as Mothmen (it is unknown if there are Mothwomen), who, for unknown reasons, meddle occasionally in the realm of man by abstractly prophesying future events (usually bad) and generally creeping people out.

There is one scene in particular where Gere is talking to a writer who has published stories about these creatures. Gere asks the man how he can explain the fact that these creatures made predictions which later came true. He asks how it can be explained what they seem to know. Are they God? The author points to a tall building, and to a person hanging from a platform on the side, cleaning windows. He says, “if there was a car crash ten blocks away, that window cleaner could probably see it. That doesn’t mean that he is God, or even smarter than we are, but from where he’s sitting he can see a little farther down the road.”

When I stand on this polling platform I feel like that window cleaner, and it takes me back to my middle school days when I had a friend named Dane. He had a big tree in his backyard which we once climbed all the way to the top and I was able to see across the alley and neighbors to the next street where my house was. I had never seen the house from that angle. It looked strange and gave me a funny feeling like this was not actually my house, but one that looked like it, and if I were to stay up here enough I might see a kid that looked like me on a bike that looked like mine return home to parents that looked like my parents and to a dinner similar to what I would later find on my own plate. I felt like a multi-dimensional-tree climbing voyeur.

Whoever first said, “it’s all a matter of perspective” probably climbed trees as a child.

Cameron stands in the front of the boat and I look past him at sand and rocks and trees and water. I see a fish straight out in front of the boat, right where he is looking, but he doesn’t see it yet. In this moment I am the only person on the planet that knows that this fish exists. It is a secret, between me and the earth and it feels good, powerful. But like any good secret it wants to be told and soon Cameron is casting and from up high I watch the line lay out in the afternoon sun and wait for it to come tight. Because I am up next and as much as I like being on the polling platform, the casting deck is really where it’s at.

« “I’m going to put it back for the next guy”
Texas water, Vermont Glass »