I wish I liked tomato juice. I really do. I like tomatoes as much as the next guy, I guess. Thin, deep-red slices on a hot grilled chicken sandwich with green chili and mayonnaise on a warm toasty roll are as necessary as delicious. Fresh from my folks garden with a little salt, pepper, fresh basil, and a dash of balsamic? Shit, yeah. Salsa? Duh. And of course ketchup. Anyone who has ever said “I can’t believe you don’t like tomatoes, do you like ketchup?” is a moron. Ketchup tastes nothing like tomatoes.

I like vodka. I like Worcestershire sauce, Tabasco, celery (I suppose, as much as one can like something that tastes like crunchy stringy nothing), olives, pickled vegetables, and various delicious salted and cured meat products. Goddammit. No drink I have ever experienced begs for extravagant overindulgence than the bloody mary.

We have all seen the garnishy ridiculousness: hamburgers, fried chicken, cocktail shrimp (this one isn’t too bad), brisket (slightly impressive), grilled salmon fillet (what?), sushi, etc. But art is not excess. Art is in the balance of taste, aesthetic, and the functionality of the thing itself. If you can’t take a walk out to the porch with your drink without fear of some catastrophic structural failure, that is a problem. Balance, my son.

That being said, Danny Reed is an artist. Literally. So when I saw him working in the kitchen of the Fisherman’s House during that first bad weather day, I was delighted and also slightly scared. I knew that he was about to create something special, that I would need to partake, and that I wouldn’t enjoy it as much as it deserved. That thought made me sad. Like a colorblind person at a Rothko exhibit, I felt I lacked the ability to really appreciate what the man was doing. I thought I would be shunned. Humiliated. Outcast. Like when you tell the smug, judging, skinny-jeaned hipster bartender that you don’t like IPA’s. But I was wrong.

The kitchen was thick with the smell of bacon. I stole a slice of Smoked Beef Snack Stick from the cutting board and popped it in my mouth. I was headed toward the jar of pickled okra when Danny turned and held out my drink. “Here,” he said, thrusting it at me like a medieval armorer handing out implements of war in the face of a fast-moving enemy front. He had thirsty men who needed cocktails, and the quicker that I took my weapon of intoxication, the faster he could arm the next weather-day warrior.

I took the cold pint glass with care, softly, as if it were sharp, dangerous. The red rim was lined thick with old bay and salt. A piece of bacon leaned casually on the rim, crispy and content with itself. Toothpick-speared pickled vegetables and cured meat products clung to the edge behind the bacon looking fearful of sinking beneath the ice into cloudy orange-red liquid. I plucked the brussel sprout off the top of the wooden spear and the pickle relaxed a bit. A long celery stick shot out at an angle adjacent the bacon, crunchy and indignant.

I raised the glass to my nose and breathed deep into an olfactic cacophony: discordant and harsh, but also pleasant and good in a way which I find difficult to put into words, like trying to describe a color.

I put the rim to my lips and closed my eyes. The thick potent liquid poured into my mouth, over and through the spices and danced around my tongue. The velvety cold mix was perfectly balanced. I let out a sigh as the flavors rose like a fire. Those flavors… that taste…

My face contorted and I stifled a gehbleh in my throat as my eyes began to water. I quickly ate a piece of smoked beef stick, a pickled okra, and half the piece of bacon followed by a bottle-shot of vodka for good measure. 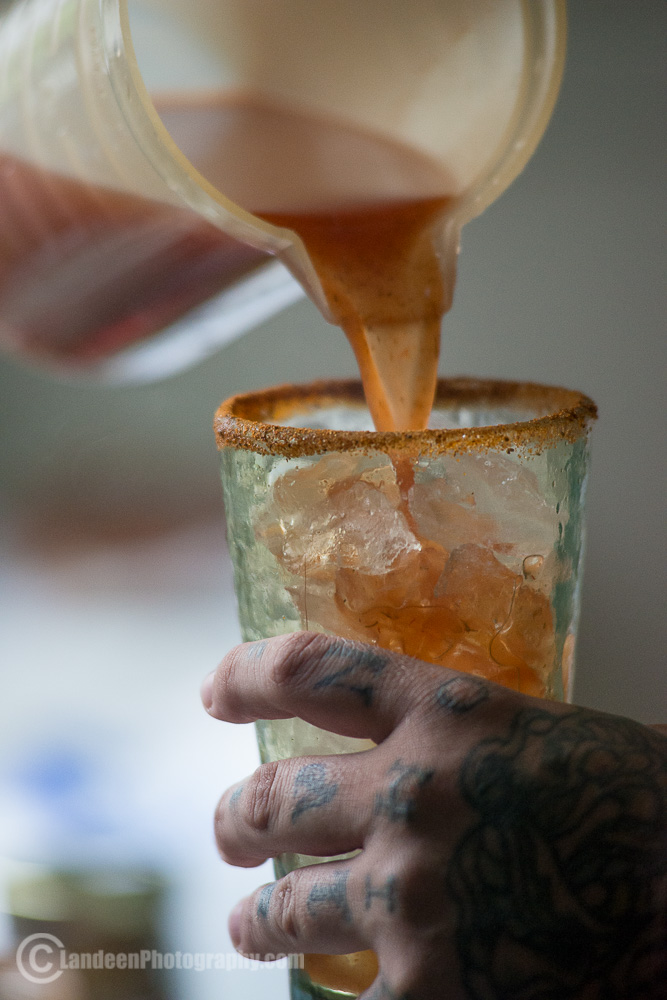 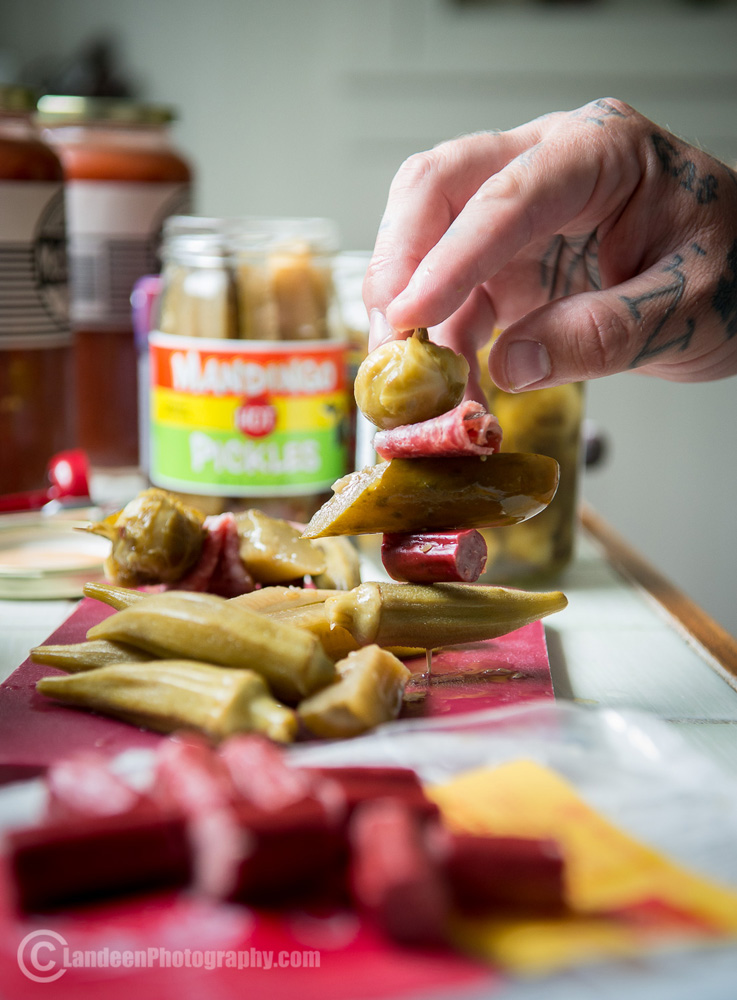 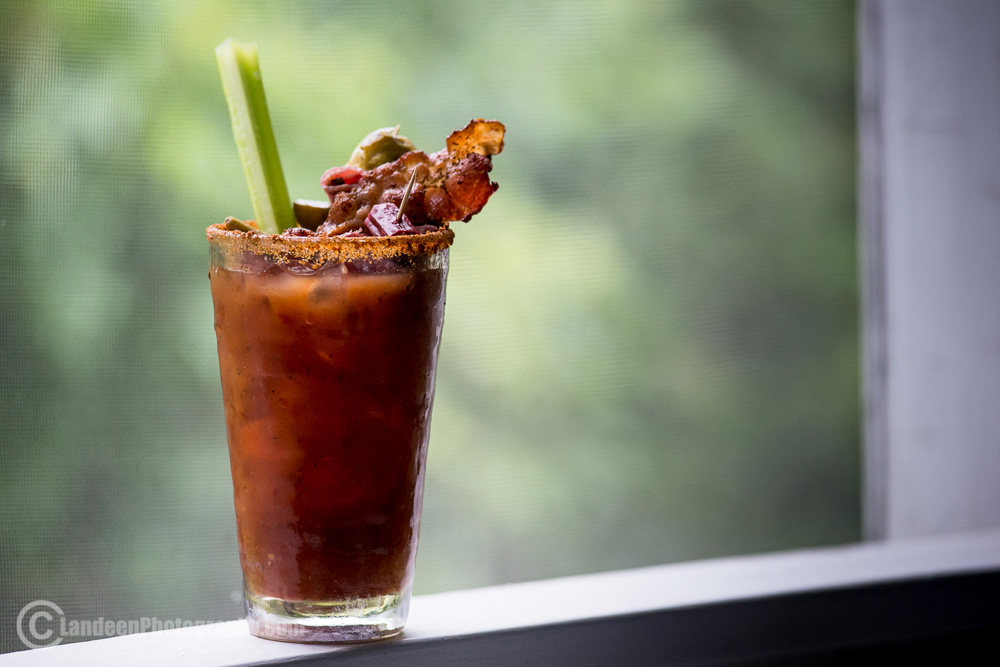 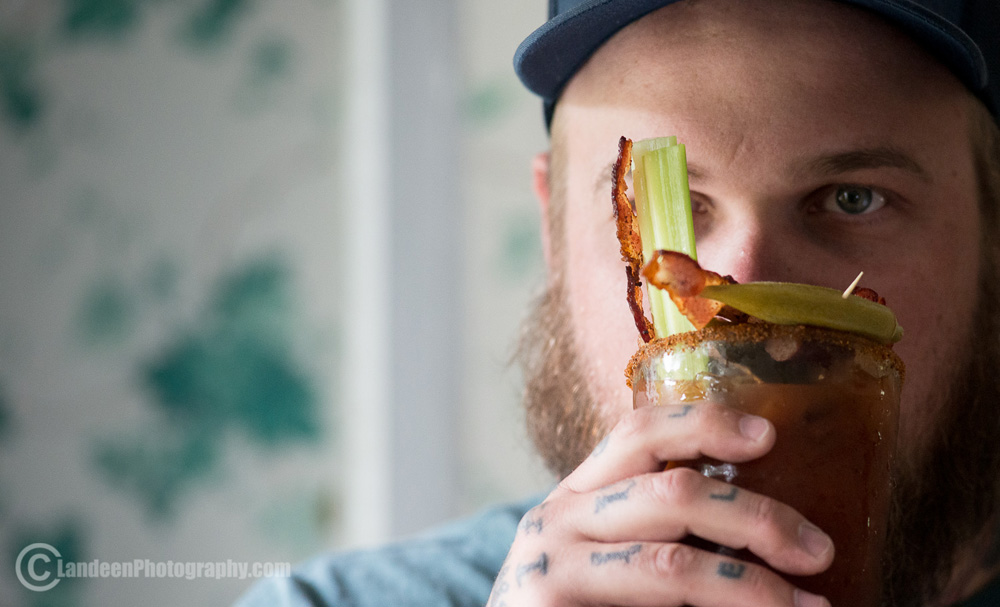 Danny Reed can be found online at CrookedCreekHoller.com, and on Instagram @crookedcreekholler

-Alex who thanks Danny for the cocktail and good company.

See all the Beaver Island 2016 Photos